Customer Feedback - What Pomi-T® customers are saying.
The Official UK Website for Pomi-T®

What Our Customers Are Saying.

A selection of customer feedback and personal observations received from people taking Pomi-T® on a regular basis.

If you have any further comments that may be beneficial to others and that may assist the further development of Pomi-T® please let us know.

Hello
I have taken POMI-T for nearly 3 months, originally after seeing it on TV as a possible treatment for prostate cancer and I thought it may be a sensible insurance as I am now in the at risk age group.
What I have noticed is a great improvement in an arthritic knee condition such that I will avoid a total knee replacement for the foreseeable future, along with this tendons have lengthened enabling better knee flexion.
I can touch my toes easily for the first time in years.
My Specialist believes that the turmeric has relieved inflammation, as I am allergic to conventional anti- inflammatories this is a great benefit.
I have recommended POMI-T to a number of friends who having played sports in their younger years have similar issues with joints.
Mr T Bromley

Urologist feels unlikely to help at my age (82) but since being on Pomi- T, PSA increase has slowed markedly.
JG

Is Pomi-T for real? I have been diagnosed with prostate cancer and was advised that active surveillance was a good option at present.
My PSA has dropped by 30% – how long do you think this will last.
DF

A major part of my self help has been my positive attitude and my diet.

I was therefore very interested in Professor Thomas’s research into diet (article in yesterday’s Sunday Telegraph).

Most of the medical profession I have been dealing with have been dismissive about diet but I have persevered and green tea, broccoli and to a lesser extent pomegranate have been a major part of my intake. By coincidence, I work in the tea business and have access to many varieties of green tea.

It was inspirational for me to read the article and find a leading professor who not only had a positive attitude to diet but also more importantly had positive results from actual trials.
SP

Hello I have been taking this product. For two weeks and I have been a tinitus sufferer for years and it has almost gone I am so happy thank you.
NR

Still getting excellent results, last visit to specialist Dec 2013 and no need for any cortisone injections, I can walk 3 plus miles without inflammation and pain.
People who I suggested POMI T have had mixed results, but those with most severe issues seem to have found some relief and increased mobility of joints.
Tony

After watching the TV program featuring Pomi – T some months back I thought I would give it a go, simply to help get rid of free radicals. After taking it for a short while I noticed that I no longer had ANY hot flushes.
I racked my brain trying to work out why this had happened as I hadn’t taken any prescribed medication for this. The only change I had made was taking Pomi-T twice daily. I was amazed and thought I would stop them and see what happened. within a day or two the flushes came back, oh boy! I started the Pomi-T immediately and within two days they had completely stopped again. I have taken them now for six months and have not had a single flush.
I would never at the outset thought for one moment this would have happened. I cannot thank you enough, flushes are debilitating and this truly has transformed my life.
SY – UK

Having seen the programme about Pomi T I was encouraged to try it for my arthritis. I am not able to take conventional anti inflammatories and also have psoriasis which may be linked. Since taking Pomi T I have seen significant improvement in both and would be interested in taking part in any trials for arthritis that you run. My flexibility has improved as have my energy levels. It is great to have improved mobility and pain reduction and I have recommended your product to friends who have joint problems.
NW – UK

Hi I have read about your trial for Pomi T for prostate cancer. My mum has been stage 4 breast since 2012 and has been taking Pomi T and has significantly improved as a result.
UK

I was diagnosed with a low grade prostate cancer in September 2011 and after doing an amount of literature research decided against any medical intervention but instead change my diet and to some extent lifestyle and proceed with active surveillance. I eat lots of fresh vegetables and have cut down on meat, dairy, processed food and products with refined sugar. Included every day was raw broccoli and tomato juice.

After 2 years the Drs we unable to detect any cancer but we’re sceptical about the diet.

I started taking pomi-t about a year ago as an additional supplement. After my most recent check up they have declared the tumour benign and have stated they cannot detect any cancer.

I was also diagnosed with arthritis in my toe joints some time before 2010 which was interfering with dancing. I was prescribed anti inflammatory tablets which assisted. Since having started with the pomi-t capsules I now dance modern jive 4 times a week for 3 hours a time and do not need any anti inflammatory treatment at all.

A double win!
Thanks
John, UK

Hi Pomi-T,
Just wanted to share some good news with you!
Having had regular twice yearly PSA blood tests for my prostate, like many other over 40 something’s, I had tried quite a few different holistic approaches to stop my PSA score from rising…
From a starting point of 3.38, my PSA increased to 3.8.
In March this year I started to use Pomi-T. In October, I had my latest PSA test and my score reduced to 3.2!!!
Whoop whoop!!!!
Thanks
Mr P Fowler

I read this article that appeared in Nature regarding the effects of Pomi-T on prostate cancer patients so started taking pomi-t.
I have prostate cancer and Pomi-T has had a profound effect on my PSA; as noted below: 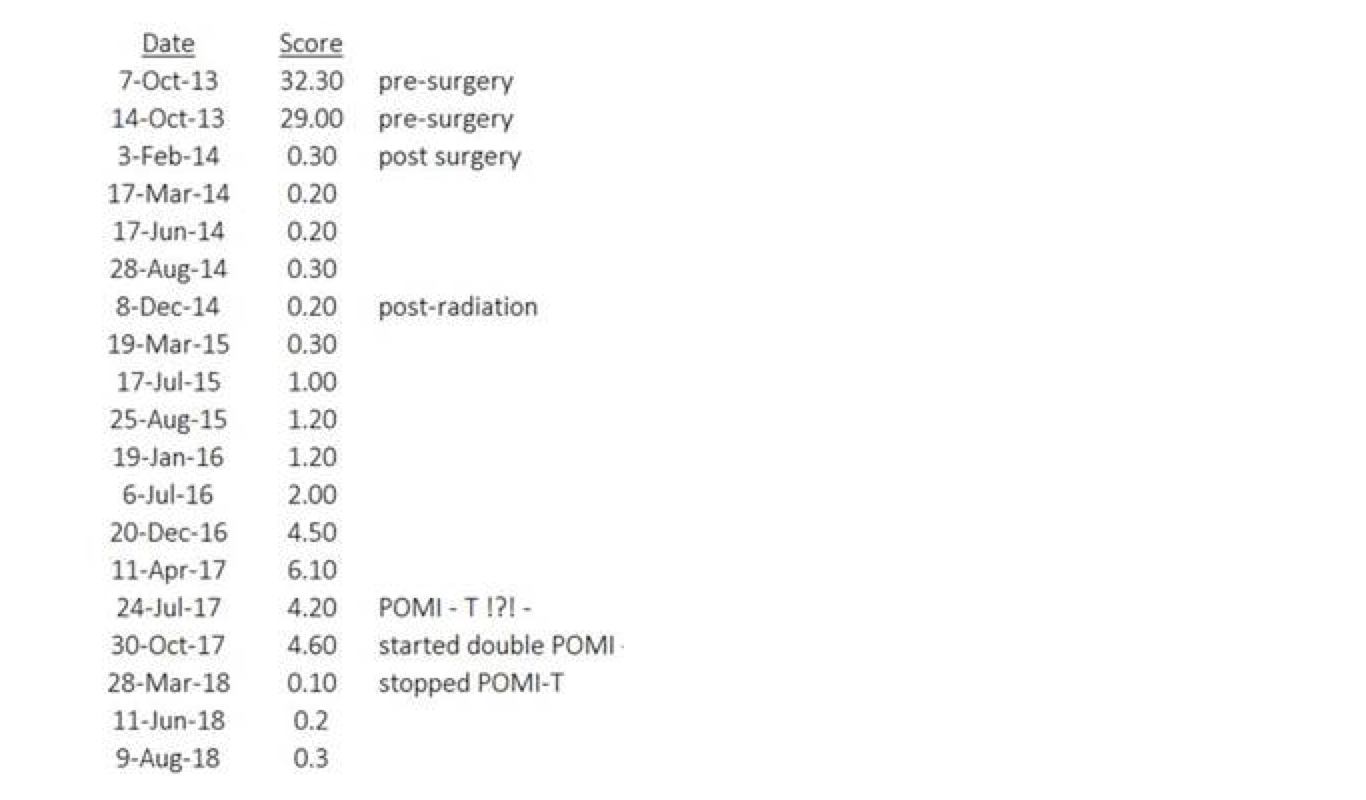 My friend who started taking Pomi-T last year had his annual check up and his PSA levels have decreased dramatically. He is very happy!
G. Horton